Here is the completed painting, now framed and hanging on my wall. I reckon it looks pretty damn fine: 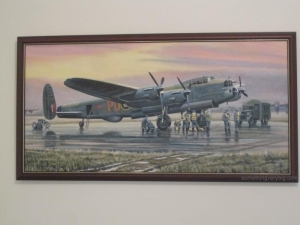 Avro Lancaster LM475 PO-B for Baker, of 467 Sqn RAAF, sits on its dispersal at RAF Waddington on 11 April 1944. Its crew has just arrived for a bombing raid on the German city of Aachen.

This painting serves as a tribute to the crew of this aircraft:

These men were shot down in this aircraft on an operation to Lille, France, on 10 May 1944. Only the pilot, Phil Smith, survived.

The painting, by Steve Leadenham, was specially commissioned by Adam Purcell, the great nephew of the navigator.

Steve advises that prints of this painting will be available in the future – details on how to get one will be posted here in due course.