ANZAC Day dawned cold and wet in Melbourne. The conditions didn’t stop 35,000 people attending the Dawn Service at the Shrine of Remembrance. I wasn’t one of them, though – instead, I got on board a Virgin jet and headed towards the north.

Descending into Sydney, the city looked an absolute picture. It was one of those sparkling autumn days that I don’t think you really get anywhere else in the world. Only the whitecaps on the rolling seas hinted at the presence of some wind.

I caught the train into the city. Emerging from the pedestrian tunnels out of St James station, I smelt rosemary and heard marching drums somewhere in the depths of the city. Yes, the March was well and truly underway.

The Air Force veterans traditionally hit the circuit around 11am so I had a bit of time to spare. A marching band moved past, its mighty horns echoing off the skyscrapers. Walking out of the tunnels I spied a familiar figure. It was Tommy Knox, a Stirling flight engineer from 149 Squadron who I had met in Canberra last year. He was clutching a free cup of tea that he’d been given by Legacy volunteers at the train station. I’d received a letter from Tommy just a couple of days before. We had a quick chat before he hurried off to find the rest of the ‘Odd Bods’, the group he marches with.

Returning to Elizabeth Street, I patrolled up and down the assembling throng, looking for people I knew. The first veteran I recognised was Hugh McLeod, a 49 Sqn rear gunner who, at “eighty seven and a half” says he is one of the youngest in the group. Hugh was adopted by the 463-467 Sqn Association some years ago and now joins them for the march and lunch each year. Once the banner arrived, safe in the care of Bryan Cook whose grandfather was a 463 Sqn mid upper gunner, it became the focal point and more familiar faces detached themselves from the growing crowd. In recent years it has become something of a tradition for Bryan and I to carry the banner for the Squadrons and we were again honoured to do so this year.

Only six veterans actually marched this year. Even the indefatigable Don Southwell was absent, having pulled a hamstring recently. He rode in an RSL-provided Land Rover instead. The rest of the bunch was made up by numerous families and friends of veterans, numbering perhaps a couple of dozen in all.

Some photos of the march:

After setting off up Elizabeth Street, we turned down Market Street– where, as has become normal each year, we halted for perhaps half an hour to avoid congestion further down the route. President of the Association Don Browning came prepared, wielding one of those walking sticks with a built-in stool. The other three in this photo took advantage of a handy window sill: 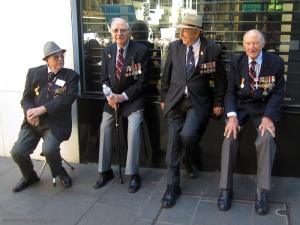 Meanwhile the wind had picked up. While we were waiting to continue Bryan and I had a good chat with Hugh, our 49 Sqn rear gunner, while he clung gamely to one of the banner’s guy ropes to keep it under control in the breeze: 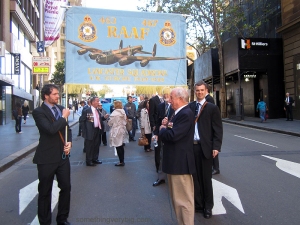 Following the march, lunch was at the Sydney Marriott hotel, on the other side of Hyde Park. Once again it was a superb meal. 48 people were present, including the same ten veterans who we had last year. Again a group photograph was organised (ignore the two young blokes holding the banner up in the background!): 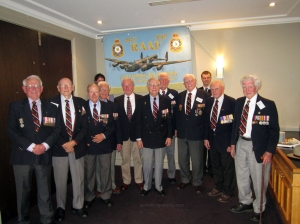 Five of these distinguished gentlemen will be travelling to London in late June for the dedication of the new Bomber Command Memorial in Hyde Park.

During lunch I sat next to Alan Buxton, a navigator. Alan never flew operationally with 467 Sqn – he actually flew his tour with 617 Sqn, the famed Dambusters. In late 1944 he baled out of his crippled Lancaster over Norwich after a harrowing return trip across the Channel with all four engines ablaze, a story hinted at by the tiny golden caterpillar badge with ruby red eyes that he was wearing on his tie. He proudly showed me his Caterpillar Club membership card, which he still carries in his wallet. After VE Day Alan was posted to 467 Sqn at Metheringham, in preparation for the planned Tiger Force operations against Japan. Thankfully the war ended before they were required to fight in that theatre. Alan appears in this photo on the left: 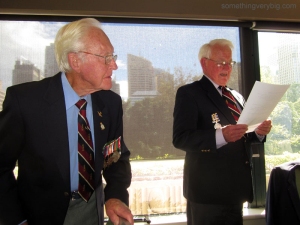 And so another ANZAC Day passes. It is always wonderful to see these blokes each year, and long may it continue. President Don Browning made a toast to absent friends during the lunch – but added that, as long as there was someone to carry the banner, there would be someone to march with it, and so the spirit of the two Squadrons will live on.