In July last year I wrote here about a 463 Squadron Flight Engineer named Sergeant Peter Taylor, and his sister-in-law, Joni, who has been trying to find relatives of Sgt Taylor’s crew. I published the names of the rest of the crew on the blog, in the hope that it might attract a passing Google search.

At the end of January I received a blog comment from a lady named Susan Little, the niece and God-daughter of the only survivor from the crew, bomb aimer Flight Sergeant Tom Malcolm. It’s taken a little bit of too-ing and fro-ing but Joni and Susan are now in touch with each other. Susan’s sent copies of a photo of Tom and his crew: 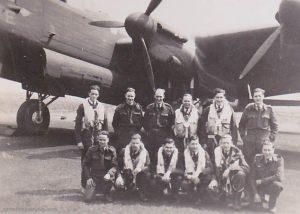 The men wearing the white lifejackets are Sgt taylor and his crew (the others are their ground crew). Aircrew in the back row, left to right are pilot P/O J.F. Martin, wireless operator F/S G.W. Bateman and bomb aimer F/S Tom Malcolm. In the front row, left to right, airmen are flight engineer Sgt Peter Taylor, navigator W/O Bernard Kelly, mid-upper gunner F/S L.G.L. Hunter and F/S Bramwell Barber.

There’s also this photo from Susan, showing some of the crew outside a pub:

Bramwell Barber is on the far left, Tom Malcolm is next to him. The airman in the middle is unidentified. Next along is Peter Taylor, and on the far right is skipper J.F. Martin.

Once again, the power of the internet is demonstrated. Two people, on opposite sides of the planet, brought together simply through a little bit of curiosity, a blog post and the wonders of the Google search algorithm. I’m happy I was able to help. And finding Susan has inspired Joni to continue her search for the rest of her brother in law’s crew.

I’d call that another satisfied customer!

4 thoughts on “Another Satisfied Customer”