It started at a different spot than over the previous seven decades.

At a much earlier time.

And the trains weren’t running (or so we thought).

And it was raining.

And there were (of course) road closures in the CBD.

But we eventually made it to the start of the 2014 ANZAC Day march in Sydney last Friday.

(And it was still raining).

We found, in a large group of veterans and other hangers-on sheltering under one of Sydney’s tall office buildings, four familiar faces in front of the 463-467 Squadrons Association banner.

The rain abated for a moment and, with a little bit of encouragement from the RSL marshals, the various banners of numerous Air Force associations formed up on Pitt Street. Bryan Cook (the young bloke on the right of the photo above) and I (on the left side of the banner) shuffled the banner sideways through the crowds, passing an Army LandRover in the back of which we found two more veterans we knew, wireless operator Harry Brown (106 and 467 Squadrons) and bomb aimer Keith Campbell (466 Squadron). We were marshalled into position as the rain started and the umbrellas came out once more. Don Southwell took the LandRover option, leaving us with three veterans for the march, with three people representing various other squadron members acting as carers. It was still raining.

As the rain dried up the march proceeded. Unfortunately we were in the middle between two different bands, each playing a different beat, and so marching in step was a challenge. We made it past the Cenotaph at Martin Place and half way down George St when one of our veterans – Don Browning -started wobbling a little and made the decision to retire. A carer detached from the column to assist. No great harm done however, and in the end Don made it to lunch before the rest of us, having procured a lift from somewhere.

Having completed the march, we carried the banner to the Pullman Hotel, across the road from Hyde Park, for what turned into a great lunch. In all fifty people attended, and as well as the six veterans who participated in the march we were joined by four more: David Skinner, Alan Buxton, Albert Wallace and George Douglass.

This is the third year that the Association has used the Pullman and they put on their usual fine show. The food was excellent and the service top-notch, but of course once again it was the conversation which really made the afternoon. Here’s Bryan talking to George Douglass: 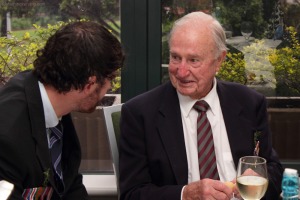 ….and here’s my partner Rachel (who came along because she “wanted to meet all those old blokes you keep talking about”!) asking Alan Buxton about the significance of his little gold caterpillar badge:

And even the veterans themselves, who know each other well, found things to talk about. Here, Hugh McLeod and Don Southwell examine Don Huxtable’s medals:

We gathered the veterans for a group photo (though one managed to evade detection in this photo):

Outside, the rain continued to pour down. But as the desserts were being served, the day cleared up into one of those magnificent, mostly blue-sky autumn days for which Sydney is so well-known. The most disappointing thing about the timing of that was that 463 Squadron stalwart Bill Purdy was unable to lead the planned Tiger Moth flypast, open cockpits and rain not being particularly good bedfellows.

Age is now, undeniably, wearying the veterans of Bomber Command. This was clear in the lower numbers of veterans taking part in the march, and indeed this is the key motivation behind the RSL’s move to change the format of the march in Sydney. Very few veterans are now under 90. It won’t be too much longer before, like the veterans of the Great War before them, there are no longer any originals left to march. But the number of people present at the lunch last Friday is encouraging. The interest from family and friends remains high and, while that continues, so too will the memories of these two Squadrons. And while we still have Bomber Command aircrew with us, occasions like these offer the chance to talk to and celebrate some of the most remarkable people I’ve ever met.

Photographic portraits of all ten veterans who attended the lunch are on a separate post, here. Text and photos (c) 2014 Adam Purcell.