Ern Cutts was (and still is) the youngest of seven children in his family. One brother was ground staff in the Royal Australian Air Force. Two other brothers were in the AIF. A sister was a RAAF nurse. His other two sisters were married to servicemen. So it was just about inevitable, as soon as he turned 18, that Ern would himself enlist.

There was just one small hurdle to jump first. His father.

Think about it for a second. Four of seven children were already in the services. Two others married to servicemen. Surely that was enough?

Well, maybe. But Ern was made of sterner stuff. There was what he called “trouble” involved, but eventually Ern managed to convince his father to sign his enlistment papers and went off to the recruitment centre in Melbourne. “I wanted to be aircrew”, he said. “And I was!”

Ern had the doubtful honour of being my first victim interview subject for the International Bomber Command Centre’s Digital Archive. My first sight of him was of an older but still fit-looking gent waving his arm at me as, about 10 minutes late, I sailed straight past the entry to his retirement complex on my motorbike. I turned around and rumbled up the path towards him, and he warmly shook my hand, grinning, and led me to the unit where he and his wife Beryl live.

I’ve been visiting veterans much like Ern for a number of years now, but the IBCC project is the first time I’ve done formal, recorded interviews with them. Perhaps I looked a little nervous as I grappled with my recording equipment. “Take your time”, Ern said. It was one of the first beautiful spring days in Melbourne this year and the birds were twittering outside as, opening the front door (“to shed some light on the subject,” he said with a chuckle), with everything ready and Beryl sitting quietly on the other side of the room listening in, we began.

It was a very entertaining interview. Ern is an easy person to talk to, and there were plenty of laughs. I asked him at one point what memories he has of the Fairey Battle. “I don’t want memories of Fairey Battles!” he said of the single-engined aircraft laughably called fighter-bombers at the beginning of the war that were hopelessly outclassed, shot down in large numbers during the Battle of France and eventually relegated to towing targets used for gunnery training, which is where Ern encountered them. “They were bloody hideous things.” Or talking about why he wanted to join the Air Force: “We didn’t have to be super fit like the young infantry blokes because we never walked anywhere – we were always driven!”

Ern was full of praise for the British people he encountered while he was overseas. “We were treated like kings”, he said more than once. He often wondered why, when he was visiting the home of a particular girl he was keen on, he and she would eat very well but the girl’s mother wouldn’t be eating. He asked his girlfriend – who said that his mother was giving up her own rations for Ern. “That’s English people for you”, he said, shaking his head. “Really tops.”

Ern was posted to 466 Squadron, flying in Halifaxes. I asked him if he did any particularly memorable ops. “My first trip”, he said instantly. It was a daylight raid to a synthetic oil plant at Sterkrade in the Ruhr Valley on 6 October 1944. “I never lived this down,” he said:

“I saw all these black puffs in the air, black things, and I said to someone, to the crew – cos everyone was excited, y’know, our first op, it was a daylight op which was good, because they did try to give you a daylight to give you a bit of an idea of what you were going into – and I said, what’s all these black things out there, and everyone started laughing… it was bloody anti-aircraft exploding… that’s how raw [I was]… by the time I got to the 34th op I didn’t need to ask!”

Logbooks are always a favourite thing for me to look at when I’m talking to veteran aircrew because they allow me to put in some sort of context their owner’s service. Most are fairly dry, but others include comments about particularly memorable trips. Ern’s even had a number of pictures stuck to the pages, of aircraft he’d flown in.

And a Messerschmitt 410, a German nightfighter. Part of the IBCC project is to scan original documents for inclusion, along with the interview itself, in the Digital Archive, so I carry a scanner to hook up to my laptop and copy any originals on the spot. At the time I missed the significance of the ME410. But when I was at home later, reviewing the scans, there it was.

This is less common than you might think for a wartime gunner. British bombers at the time were armed with Browning .303 machine guns – with an effective range of some 400 yards. Nightfighters, on the other hand, usually had cannon with a maximum range of about 1,000 yards. The inevitable result was that the favoured method of attack was for a fighter to stand off, undetected, outside the range of the Brownings and fire at leisure. The best chance of escape for the bomber crew was in spotting the fighter before it saw them. Many gunners who survived a tour, then, did so without firing a gun in anger, let alone actually scoring any hits. Having a confirmed kill to his name is actually quite an achievement.

And during our interview, about shooting down a nightfighter he said exactly nothing. He was similarly reticent when I enquired about an immediate DFC awarded to his pilot, the aforementioned F/O A.B. McCallum, after the aircraft was hit by anti-aircraft fire on a trip to Gelsenkirchen (Ern’s 9th) in November 1944. It wasn’t anything out of the ordinary, Ern suggested. Otherwise it would be remarked upon in his logbook. 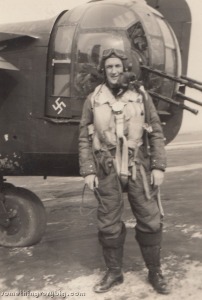 Most likely it’s that legendary modesty often found in veterans of Bomber Command coming through here. They didn’t think they were doing anything special: there was a job to do, and it fell on their shoulders to do it. And so their stories frequently concentrate on the lighter side of life in wartime England.

Finishing his tour in March 1945, Ern was eventually posted to 467 Squadron at Metheringham, preparing to begin training for Tiger Force to continue the war against the Japanese. After the atomic bombs ended the requirement for that he flew a couple of POW repatriation flights, taking part in Operation Spasm to Berlin and Operation Dodge to Bari in Italy in September 1945. Both trips, he told me, were completed with all non-essential equipment stripped from the Lancasters. Including all the guns and all the ammunition.

I had to ask the obvious question. If there were no guns on board, why did they need gunners?

Well, someone had to look after the repatriating POWs, many of whom had never been in an aeroplane before. “Believe it or not”, he said, “we were just air hostesses!”

The tone turned a little more serious, however, when I asked Ern how he thought Bomber Command was remembered. There was a lengthy pause before he answered.

Bomber Command, he said, was until D-Day the only organisation taking the war direct to Germany. For that reason, the English people in particular treated the men of Bomber Command with the same respect and admiration that they had for, say, the French Resistance. “If I go to an RSL,” he said,

“…and a bloke says, what were you in, Ern, were you in the Navy or Army or something, I say, no, I was in Bomber Command, and if he is an English person, ‘oh were you… oh… you blokes, gee… y’know. So it makes you kinda feel very humble, very proud and very humble.”

And that, I thought, was a beautiful way to finish our interview.