“PER ARDUA AD ASTRA – For we are young and free.”

With these words, Director of the Australian War Memorial Dr Brendan Nelson closed a speech delivered at the Bomber Command lunch in the shadows of Lancaster G for George last weekend. He was speaking, specifically, to the 38 veterans of Bomber Command who were among the audience, telling them that the latter phrase can be in Australia’s National Anthem because of deeds done by the likes of them.

Dr Nelson’s speech – a rolling masterpiece, delivered with passion, skill and emotion (and just the right amount of self-deprecating humour) by a man who admittedly does this sort of thing for a living – will long be remembered by those who heard it. It received a standing ovation and was a clear highlight of a weekend that brimmed with them: the tenth annual Bomber Command Commemorative Day.

Ostensibly there were, perhaps, two reasons why a particular effort was made to make this year somewhat more special than usual: the fact that this was the tenth such event, and also to mark the 75th anniversary of Australian squadrons going into action as part of Bomber Command. There is some contention on this latter point (as author Kristen Alexander has pointed out) and in a way it’s unfortunate that someone felt the need to justify ‘extra special’ treatment by concocting an anniversary which doesn’t quite stand up to scrutiny. But whatever the justification for it, this was a very impressive event. The federal Department of Veterans Affairs were involved early on by making funding available to assist veterans to travel to Canberra, Royal Australian Air Force Association coordinated the DVA grants, Bomber Command Association in Australia were actively contacting all the veterans on their database to ensure that they were aware that assistance was available, Bomber Command Commemorative Day Foundation coordinated guest lists and arranged the Meet and Greet, and the Australian War Memorial hosted, ran and even paid for more than 300 people to enjoy lunch in the shadows of G for George. Each of those groups, and more, played a role in delivering the biggest and most significant Bomber Command event seen in Australia for several years.

It’s become traditional in the last few years to focus on an Australian Bomber Command airman in the ‘Last Post’ ceremony, with which the AWM closes each evening, on the Saturday night for this event. This year it was Flying Officer Charles Williams, who died on Operation Chastise in May 1943. Several hundred people were present, including a good number of Bomber Command veterans: 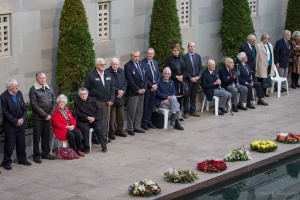 I am more of a fan of the way the War Memorial used to mark the close of each day (a far simpler ceremony with a lone bugler or piper), but this Last Post ceremony was well done, with an all-Air Force catafalque party providing an honour guard and F/O Williams’ story told simply and well. 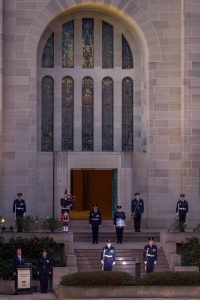 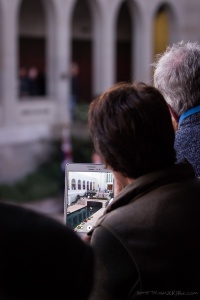 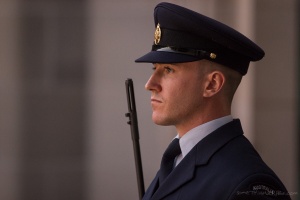 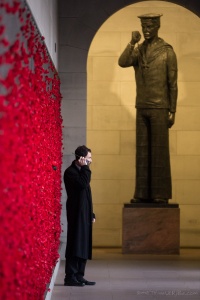 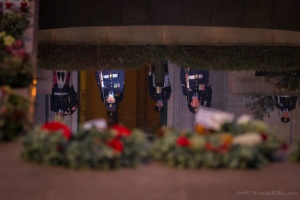 Following the ceremony, we moved into the AWM’s Reception area, mostly to get out of the cold while waiting for the Meet & Greet cocktail party to begin. Dr Nelson, though, decided it was time to move, getting up onto a bench to ask the crowd “what are you waiting for? We need a navigator…” and exhorting everyone to move to the Anzac Hall.

There was a short delay while final preparations were being made for the night’s function. But once the Air Force jazz quartet started up, it was a very good night: talking with people I’d just met, seeing familiar old faces and soaking up the atmosphere of that big collection of metal known as G for George.

It was lovely seeing a young Sydney couple (Josh – himself ex-Navy -and his wife Katie, both of whom who I’d met on Anzac Day this year) talking to Bill Purdy. Josh had a grandfather who flew with 463 Squadron. On mentioned his name, Bill remembered him immediately. I left them listening intently to his recollections. 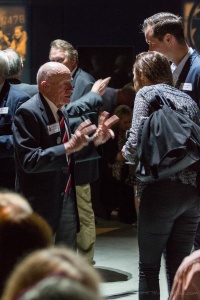 It was also great to catch up with Ray Merrill again. One of my favourite veterans, who I’d met at the Canberra weekend in 2014, Ray had come from Adelaide with no fewer than 16 relatives and friends: 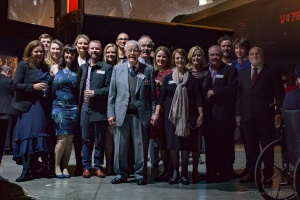 Sunday saw the sort of morning that, despite the rain that has affected it on some occasions, I most associate with this weekend: bright, sunny and cold. A big crowd gathered in front of the Bomber Command sculpture in the grounds of the AWM for the ceremony, the centrepiece of the weekend’s events. Plenty of veterans were scattered around the crowd, with a catafalque party provided by the Federation Guard and an honour guard of current 460 Squadron personnel making up the most visible uniformed presence. It was particularly pleasing to see no fewer than four veterans taking active roles in the ceremony, including Ray Merrill who delivered an excellent Reflections speech: 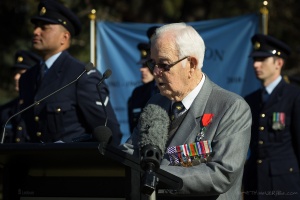 Another impressive speech was given by Senator Linda Reynolds (representing the Prime Minister). Senator Reynolds, it turns out, has two Bomber Command connections in her family, and so her speech was heartfelt and honest.

And then, afterburners twinkling, a 77 Squadron F/A18 Hornet screamed over the crowd to end the ceremony, pulling up to disappear in a vertical climb over Mount Ainslie.

This year’s Bomber Command lunch was one for the ages. It saw the most people attend, I think ever, and the most Bomber Command veterans that I’ve seen in one place in a very long time. Seated under George’s starboard wing, the atmosphere was quite unique. As well as Dr Nelson’s outstanding speech, several veterans spontaneously got up to say a few words. There was Rob Jubb: 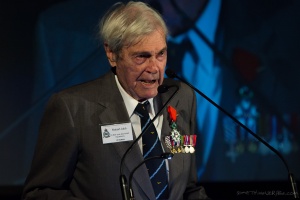 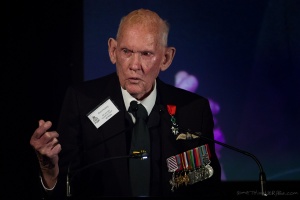 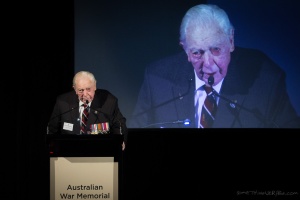 The most revealing thing? All three told stories relating to wartime service – but not about their own wartime service. The stories were about someone else.

That famous modesty of this generation, on display again. 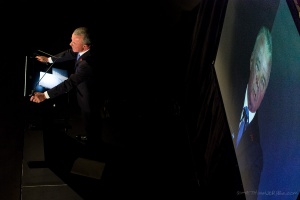 This was a particularly special weekend, the likes of which I doubt we’ll see again. Without going overboard, the focus was firmly on the veterans we had present. Absent friends were also kept close to mind throughout. While there was some confusion in the lead-up, probably because of the multitude of groups involved in putting it together, the actual events appeared to run smoothly and professionally in a genuinely respectful atmosphere. Though several needed to pull out at short notice on medical grounds, the effort to get as many veterans as possible to attend, from all over the country, was very successful. One man I met for the first time – Howard Hendrick – came all the way from country South Australia, which is not a particularly straightforward journey. This was the first time he’s ever come to a ‘reunion’ like this. Seeing how much he enjoyed himself will, I’m sure, reaffirm to everyone concerned the value of weekends like this.

Long may it continue. 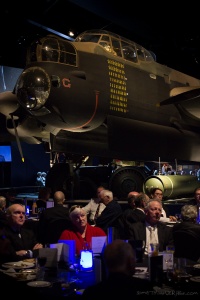