The Bomber Command Commemorative Day Foundation, with the support of the Australian War Memorial, will hold their 5th annual Commemorative Day in Canberra on the weekend of 2-3 June 2012. Three events are planned: a ‘Meet and Greet’ function on the Saturday night, then a Memorial Service and Luncheon on Sunday.

The Meet and Greet function takes place in the shadow of G for George, the AWM’s Lancaster, in the ANZAC Hall from 6 to 8pm on Saturday 2 June. Cost is $50, hot and cold canapes will be served with beer, wine, soft drink and juice also provided.

The Luncheon takes place at the Rydges Lakeside, Canberra, 12.30 for 1pm to 4pm. $55 covers a sit-down two-course meal with tea and coffee, with a cash bar operating.

To attend the Lunch and/or the Meet and Greet, contact Keith Campbell by 18 May: 142 Coonanbarra Road Wahroonga NSW 2076. Cheques to be made out to Bomber Command Commemoration Day Foundation.

The focus of the weekend, however, is the Memorial Service. This is held outdoors in the Sculpture Garden of the Australian War Memorial, by the Bomber Command Memorial. To allow the organisers to anticipate numbers, please RSVP to the AWM by 11 May: rsvp@awm.gov.au or 02 6243 4363.

In the group photo taken at this event last year, I counted 50 veterans. This is one of the largest gatherings of Bomber Command aircrew (and at least one WAAF) in Australia and for that reason alone it is well worth attending. Talking to so many veterans in the one place at the one time is an opportunity that doesn’t come around too often. I’ve been to three of the last four of these events and they never fail to impress. More information can be found at http://commemorativedayfoundation.com/.

Update 21APR12: I’ve managed to organise the weekend off so I’ve booked my flights to Canberra for this event. There are also events on in other parts of Australia, for those who can’t make it to Canberra:

I think there are also plans for NSW and SA, but I haven’t got details yet.

There was an old man sitting patiently in the departure lounge in Melbourne when I boarded a QantasLink Dash 8 to fly to Canberra last weekend. Sat next to him was his middle-aged son. When we boarded the aircraft they sat across the aisle and a few rows in front of me. I overheard a snippet of half a conversation that the younger man was having on his phone: “meeting in Canberra… taking him to… you know, Air Force stuff…” I watched his father as we powered down Runway 34 and took off. He was gazing out of the window, and his thoughts looked like they were miles away: across the seas, and across the decades.

They were going to Canberra for the same reason I was: the fourth annual Bomber Command Commemorative Day. I next saw Ian and his son Phillip underneath the nose of Lancaster G for George at the Meet & Greet cocktail party later that evening and went across and said g’day. Ian had been a 460 Squadron pilot so it was fitting that G for George, a 460 Squadron machine, was the centerpiece of the function.

It was an outstanding evening. There were perhaps 150 people present, a fair proportion of those being veterans. Talking about flying Lancasters with people like Don Huxtable, a 463 Sqn skipper, was a unique experience as he casually threw a thumb over his shoulder at the old bomber to emphasize a point. The function ended with the magnificent ‘Striking by Night’ sound and light show recreating a bombing raid around the Lancaster. We retired to the hotel bar for a nightcap, ensconced in a warm corner while Don Southwell held court.

It was a cold and misty Canberra winter’s morning when we awoke. But the sky soon cleared and the sun was nicely warming as we took our seats for the ceremony at the Australian War Memorial.

As is customary the AWM Ceremonies division put on a good show. It ran smoothly and Don Browning’s ‘Reflections’ presentation was particularly good. As the first notes of The Last Post rang out into a brilliant blue sky the line of young RAAF officers in the row in front of us snapped into a salute. It was a moving moment.

After the ceremony all the veterans moved up towards the War Memorial buildings for an extraordinary group photo. I counted 50 veterans, surely one of the largest gatherings of Bomber Command airmen (and at least one WAAF) anywhere in the world these days.

The final part of the weekend was the luncheon. This was, I reckon, the highlight of an already highlight-heavy weekend. Some 200 people showed up, with at least one veteran at each table.

The best part of this event is the ability to float around between tables talking to all sorts of interesting people. Until today, I’d never met a real live Bomber Command flight engineer. Tom Knox, a Glaswegian flight engineer from 149 and 199 Squadrons, is on the right here:

The other man is Pat Kerrins, a pilot from 115 Squadron. They were in animated conversation regarding a mutual friend and just being a fly on the wall while they chatted away was fascinating. A copy of this photo will be winging its way to each of these men shortly. I also met Jean Smith, who served in the WAAF at 27 OTU, RAF Lichfield, and a couple of likely suspects involved with the 463-467 Squadron Association in Melbourne. All very interesting people to know.

This has become an extremely significant event in the Bomber Command calendar in Australia. The Bomber Command Commemoration Day Foundation was set up to organise events like these to ensure that the men and women of Bomber Command get some long-deserved recognition. Behind ANZAC Day and Remembrance Day, this is now the third largest single event held by the Australian War Memorial each year.

Given the level of interest in this year’s event, the men and women of Bomber Command can rest assured that it will continue into perpetuity. 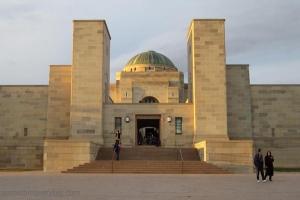