How I imagine Phil Smith’s solo might have happened…

“It’s all yours, Smith – just do what Maguire told you to”, the senior instructor yelled into Phil’s ear, as he dropped off the wing and walked away from the Tiger Moth. It was early on one of those mornings that had the promise of turning into a real stinker in Tamworth. “And don’t bend it!” He waggled the elevator up and down – oh yes, keep that stick back, Phil, you twit – as he left. Phil blipped the throttle to get her moving, pushing the rudder pedals one way and then the other to keep the Tiger Moth weaving but heading, on average at least, in the direction he wanted it to. As the nose moved to each side, he peeked down the other side of the fuselage to make sure they would not taxi into anything.

Still rolling, Phil pushed the throttle forward to carry out his run-up checks – reaching outside the cockpit to flick the magneto switches off and on one at a time while  listening for a faint drop in RPM, closing the throttle and checking it idled smoothly, ‘stirring the pot’ with the control stick and rudder pedals – then released the trim. Nearing the far end of the field now, he checked the windsock, satisfied that from here he could take off directly into the light breeze that was blowing. He checked for any approaching aeroplanes, then turned into the wind and opened the throttle.

As the Tiger started to accelerate, he added progressively more left rudder to counteract the swing to starboard – the tail came up and suddenly he could (after a fashion) see ahead. Like the graceful creature she was, the Tiger Moth lifted from the grass, seemingly all by itself. Wow, he wasn’t kidding, they do climb better empty. Phil pushed forward slightly on the stick to place the horizon just below the edge of senior instructor F/O Maddocks’ windscreen (speaking of Maddocks, where was he?), adjusted the throttle back to 2150 rpm and checked the airspeed indicator. Good, he thought, it’s reading about 55 knots, just where it should be. Gee, it’s chilly up here. Keep those b—-d wings level – still got the power on, still got the left boot jammed into the rudder pedal. Sneak a glance at the airfield behind, the slipstream clawing at the top of his leather cap. Flying straight, that’s good.

Approaching 500’ on the altimeter now – lead the turn with a little rudder, then ease into the bank. Stop the turn. Still climbing. Nearing 1000’, circuit altitude. Turn downwind, lower the nose a little and reduce the power to about 1900 rpm – there, that sounds about right. Trim out the control forces – airfield off to the left, its far boundary just outside the wingtip. There goes another Tiger, he thought, as a little yellow biplane lifted off. With the power back it’s marginally warmer, but it’s still jolly cold in here. Wow, I’m actually flying – by myself! He looked all around, but it was true – he was the only one in the aeroplane. Solo!

“Wings level”, growled Maddocks through the Gosport.  Or he would have, had he been there. Whoops. Phil came back to reality. His touchdown point slipped past the left wingtip and it was time to think about the approach. I thought I’d be more nervous than this. Pull the throttle back to idle now – the engine coughed a bit, must have moved the throttle a bit too fast. It settled, and Phil kept the nose up as the aeroplane decelerated. Rolling into the base turn – don’t forget that rudder – he looked through the wires at the touchdown point. Looks a little high, he thought. Wait… don’t fall for that one again. Maguire had always told him it was easier to lose height than try and find it again. With the power at idle, all went comparitively quiet and he listened to the sound of the wind through the wires. Whoops. The singing wires turned higher in pitch. Too fast. Nose up a bit – the noise fell away and the aeroplane slowed down. There. That’s better. He shifted his backside on his parachute – the aeroplane wobbling from the inadvertant rudder movement. Aiming point – that rough patch of grass – stayed framed by the wings, just where it should be.

He started rolling into the final turn – added a bit of right rudder to sideslip neatly towards the ground. Too high – watch that airspeed – more aileron and more rudder to steepen the sideslip, then the aiming point disappeared below the nose and it was time to straighten up. Kicked her straight, brought the wings level – put on a trickle of power for the extra control authority. Transitioning into the flare, Phil brought the stick back a little bit. Feeling for the runway – lots of little, almost imperceptible jerks on the controls – then he felt the wheels kiss the grass. Power off – a tiny bounce – then she settled. Stick forward a tiny bit to pin the wheels onto the deck. Keep her straight! The Tiger Moth slowed down and Phil’s view forward disappeared as the tailskid dropped neatly onto the ground. Keep her straight! At walking pace now. Phil turned off the runway. There’s Maddocks, out to the side – how curious, he almost looks pleased. Taxied to the flight line, weaving back and forth – there’s that erk again, waving him in. There now – throw the switches, the engine stopped, the Tiger Moth rolled tidily to a halt, perfectly lined up with all the others. Helmet off, harness unbuckled, stand up – on shaking legs – climb out of the aeroplane (don’t forget to turn off the front switches). It’s only then that he realises what he’s just achieved. 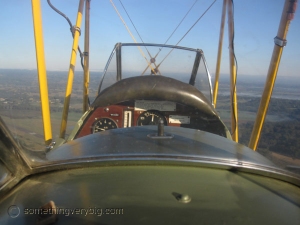 One thought on “Tiger Moth”