Among the small collection of photos that my family has belonging to Jack Purcell are two postcards from the English town of Lichfield. Both are unwritten and unsent. The only mark on either is a tiny cross in pen, at top right of this one: 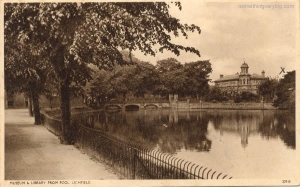 Jack was stationed at the nearby RAF Lichfield between 22 June and 9 September, 1943. The airfield – actually closer to the village of Fradley than to Lichfield itself – was the site of No 27 Operational Training Unit during the war.

The OTU stage of an airman’s training was where, in general, he first ‘crewed up’. The concept of the ‘crew’ is central to the Bomber Command legend – even transcending class boundaries in the RAF. Crews would, by the time they got onto a squadron, live together, play together, fight together and, all too often, die together. While officers and NCOs might have lived and messed separately, most crews socialised together when off-duty. In many cases airmen began strong friendships that would last them the rest of their lives.

But it took time for those uniquely close bonds to develop within the crews. The OTU was where it started and where the crews learnt to operate as an interdependent unit, but they were not there yet. As Don Charlwood wrote of his first flight at an OTU, in his superb book No Moon Tonight:

Consequently in many cases crews would not therefore come to regard their time on an OTU with any particular affection like they would their time on an operational squadron. The OTUs, it could be said, were the forgotten part of Bomber Command.

They were nevertheless an extremely important part of the Bomber Command machine. Many Australians passed through the gates of Lichfield. In the forecourt of Lichfield Cathedral is a memorial park bench which was paid for by Charlwood after the war. The plaque on it reads as follows:

“To the memory of the many hundreds of Australian airmen who trained at No. 27 Operational Training Unit Fradley during the Second World War. In Lichfield they found peace and friendship”

“It always tantalized me when I gazed from the sergeant’s mess across the fields to the cathedral and thought of life going on in Lichfield, not as in peacetime to be sure, but at least with semblances of normality. Most of us were glad to escape [to] there” (C07-034-093)

While Lichfield will never be as famous as Waddington or Binbrook, it is clear that airmen like Charlwood understood its significance to the war effort and to the development of the crews of Bomber Command. It is also significant on a personal level for Jack Purcell, simply because of the existence of those two postcards.

Unlike the superb archive of letters and documents that I have been lucky enough to study from Mollie Smith and Gil Thew, we have very little bar a few photographs from Jack. I know he wrote letters while he was in the Air Force but what happened to them is unknown. These two postcards – though unwritten – are therefore particularly special.

So special, in fact, that in 2009 I visited Lichfield in an attempt to discover what the mysterious cross might have been marking. Chris Pointon of the RAF Lichfield Association was my guide. We first visited the Cathedral, in front of which was the park bench donated by Don Charlwood. Interestingly the bench is the only memorial to the OTU in the city – the building’s importance to the airmen seemingly less spiritual (as a religious place) than it was practical (as a prominent landmark nearby the airfield). Down a hill from the Cathedral we came to the Pond. At first Chris could not recognise the postcard – sixty-five years of tree growth has significantly changed the scene. But the road bridge with its three arches stands out. Walking towards it I could make out the distinctive façade of the Library and Museum through the thick tree growth:

And the cross? Standing in front of the Library, looking up the street, I spotted two buildings.

One is the Probate Court.

The other is the Angel Croft Hotel.

For some reason, I reckon Jack was marking the pub. 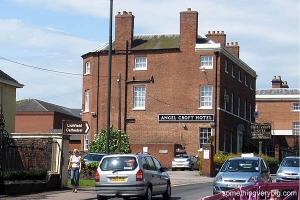 Hat tip to Chris Pointon for the idea that inspired this post.