In the very back of my great uncle Jack’s wartime logbook is a list of places and dates. It records the places at which he served, from Air Observer School right through to the Squadron. Jack evidently wasn’t the world’s most fastidious record keeper because the list is missing some places that are shown on his service record, but it does list all of the airfields he was stationed at. 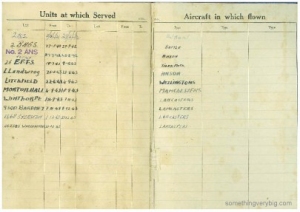 The last eight names on the list are in the UK. When I was over that side of the world in 2009 I hired a light aeroplane and a local instructor from Tatenhill Aviation and flew over four of them, plus a number of others.

Tatenhill was a satellite airfield for 27 Operational Training Unit, RAF Lichfield. As it turns out, Lichfield itself is not very far away. Just after we took off we turned left – and there it was, less than seven miles to the south. 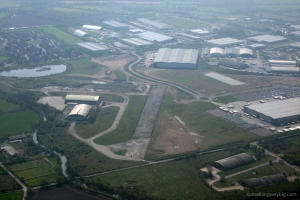 At first it took me a moment to recognise it as an airfield. Parts of a runway and a number of hangars are still extant, but on top of what used to be a runway is now a great big Tesco warehouse. The northern corner, with half a runway, some taxiways and a couple of blister hangars, is the best-preserved section of the old airfield, though now in considerable disrepair.

Morton Hall was not an airfield, though it is very close to the remains of RAF Swinderby. It became No. 5 Group Headquarters a few months later but it appears that it was a venue for lectures about security and significant physical training at the time that Jack was there (C07-014-067). It was a prison when I drove by in 2009 and is now an immigration detention centre, so no photos. On my flight however we did see Swinderby.

I was quite pleased to discover what appeared to be a relatively well-preserved RAF airfield when I visited on the ground a day or so later – but just a few months later the whole site was flattened for development.

But enough of that. Onwards with the aerial tour through Jack’s logbook. Winthorpe was a Heavy Conversion Unit, where Jack and his crew got to grips with the Lancaster for the first time.

One corner of the airfield is now the Newark Showgrounds, and across from those is the fantastic Newark Air Museum.  There’s very little remaining of the original airfield, and the runways, which were used for gliding until recently, are no longer fit for use. But at least one corner of the old airfield still has some sort of aviation activity taking place on it.

Bardney is only a few miles from Lincoln. From the air, the triangle of the runway layout is still visible, though most of the hard surface has been removed.

The old airfield has reverted to the farmland it one was, with thousands of chickens now occupying sheds on what used to be the runways. Jack was only here for a few months serving on 9 Squadron, losing his pilot in a ‘second dickey trip before flying operationally himself. The crew did record some training flights from here however.

After losing their pilot Jack and (most of) his crew were posted to another Heavy Conversion Unit, this time at Syerston, where they joined up with Phil Smith. We skirted around Syerston on my flight but didn’t actually go over the top so I have no aerial photos of it – though I did visit the RAF Gliding squadron that now occupies the site on weekends.

The last unit in Jack’s logbook is of course 467 Squadron at RAF Waddington. This is where, on 10 May 1944, he and his crew climbed aboard B for Baker and took off in the direction of Lille on their final flight. Waddington remains an active RAF station and retains very little of its wartime ‘feel’, though remnants of the original triangle runway layout are still used as taxiways. 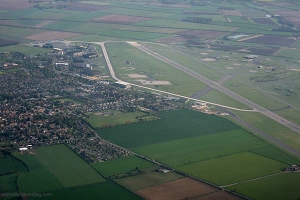 There were a number of other airfields that we also flew over on this trip, with names like East Kirkby, Conningsby, Metheringham, Bottesford and Tollerton. What was perhaps most telling for me, used to the wide open spaces you get flying in Australia, was how close by everything is. I logged 1.5 hours for this trip, out and back, and we flew over at least ten separate wartime airfields that I could recognise, with a good few others nearby that I couldn’t identify. It’s not hard to imagine how crews could get lost and land at the wrong airfield, particularly during the wartime blackout, and the proximity of the bases would have considerably heightened the collision risk.

Most poignant, however, was at the most easterly point of our flight, near East Kirkby. From there, the coast is about fifteen miles away. That coast line was extraordinarily significant to the aircrew of Bomber Command. On the way out, it marked the end of friendly territory – beyond it was the enemy. And on the way home some hours later, it meant they were back among friends.

3 thoughts on “Flying around the bases”