The Temora Aviation Museum has begun a project they call Unsung Heroes.

“How many Heroes go unnoticed?” reads the blurb on their website. “How many stories go untold? How many memories are forever lost?”

To try and stem the tide of lost memories, the Museum is collecting stories of people who were involved, in one way or another, in Australia’s military aviation heritage. As the project gets underway the collection of stories on the website is so far not a large one, but there are some interesting people profiled in the entries currently there. At $85 a pop, though, the privilege is not cheap, and I’m not sure how I feel about compelling such a significant donation in order to submit content to the database. But at least the Museum is making an effort to recognise the creators of the heritage they preserve in the form of their flying warbirds. 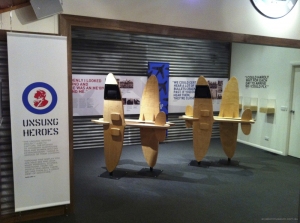 An offshoot of Unsung Heroes is a video database aimed at a similar group of people. According to the latest email from the Museum, the database “includes men and women who, although not given recognition in the history books, have been vital to the pioneering spirit of Australia’s military aviation heritage.” There’s thankfully no mention in the email of any fee for taking part in this part of the database, and it looks like the Museum is looking for veterans to interview. Selected interviews are it appears available to view via iPads installed in a permanent exhibit in the Museum’s galleries (see image above – from the website of the designer, Bob Shea).

And here is the reason for this post. The biggest event in the calendar of the Temora Aviation Museum is Warbirds Downunder, an airshow featuring all of the Temora Aviation Museum’s collection of aircraft and a whole host of other significant flying warbirds. This year it’s scheduled for Saturday 2 November, and the Museum’s videographer will be there, covering the airshow but also interviewing veterans for the database.

With limited resources it appears unlikely that the Temora database will ever even begin to approach the scale and sophistication of the excellent and extremely far-ranging Australians at War Film Archive (which had the backing of the Australian Government), but it’s perhaps an opportunity for veterans to take part in a less-formal interview situation. Temora is a long way away from any of the state capitals and getting there is a bit of a mission (unless you fly out there in a private aircraft, as I’ll relate in a future post), but if anyone is interested in taking part, contact the Museum by email or by phone on 02 6977 1088.

Hat-tip to Kevin Jacobs for the heads-up.