While the Imperial War Museum undergoes significant redevelopment in preparation for the centenary of the First World War, some of its bigger and most well-known exhibits have been removed from its main site on Lambeth Road in London and temporarily installed at Duxford. Among them is the forward section of a rather significant Lancaster.

Avro Lancaster Mk I DV372 of 467 Squadron flew its first operation on 18 November 1943. The target was Berlin. Over the next seven months the aircraft would fly on 50 raids, [1] including the entire Battle of Berlin period, the infamous Nuremberg Raid and the Transportation Plan operations on French railway targets in the lead-up to D-Day. Old Fred, as it was known on account of its squadron code letters PO-F, was on the strength of 467 Squadron at the same time as the crew of B for Baker, and indeed Phil Smith and most of his crew took it on its 16th trip, to Berlin on 28 January 1944. But the man with whom Old Fred is probably most associated is Flight Lieutenant Arnold Easton, a 467 Squadron navigator who flew 20 trips in the aircraft from March until May 1944. I was lucky enough to get a copy of Arnold’s logbook a few years ago. Befitting his civilian career as a civil engineer, it is one of the most detailed and comprehensive wartime logbooks I’ve seen and forms the basis of a book, We Flew Old Fred – The Fox, compiled by Arnold after the war.

After its front-line service it appears that the aircraft was damaged in an accident, requiring repairs that took several months to complete. It was sent to 1651 Conversion Unit where it saw out the war before being broken up in October 1945. Happily someone thought to save the nose section which eventually is how it became part of the collection of the Imperial War Museum. It was one of three Lancasters I ‘visited’ while in the UK in 2009. 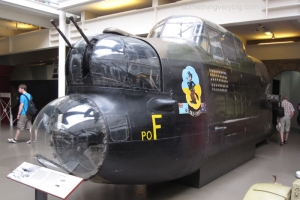 Among the people I met at the recent Bomber Command Panel Discussion event held at the Shrine of Remembrance in Melbourne was Arnold’s son Geoff. As well as discussing the intriguing possibility of reissuing his father’s book (now out of print and extremely difficult to get hold of), Geoff told me a lovely story of what happened when he was in the UK in June 2013.

Like many surviving Bomber Command aircrew, Arnold kept some bits and pieces relating to his wartime service when he returned to Australia. Geoff used to play with his flying helmet, putting it on and pretending to connect the intercom cable, with its distinctive bell-shaped Bakelite plug, into an imaginary ‘aeroplane’. Somehow it never stayed plugged in.

Since his father’s death some years ago, Geoff and his wife decided to donate his leather flying helmet and metal circular navigational computer to the Imperial War Museum, unique relics with a direct connection to Old Fred. They arranged to take the artefacts to Duxford where the IWM’s Andy Marriott is taking the opportunity, while it is out of London, to clean and conserve the remains of the aeroplane. Indeed, Andy asked Geoff at one stage whether his father had chewed gum. While ferreting around in various locations under the navigator’s position he had found some lolly wrappers, a chewed-up wad of gum and a NAAFI form with aerodrome weather written on it:

Andy allowed Geoff and his wife to crawl into the aeroplane through the bomb aimer’s escape hatch in the nose. They then used the yellow handrails on the side of the fuselage to move up underneath the flight engineer’s position into the cockpit proper. There, just behind the pilot’s seat, was the navigator’s bench and, tucked in underneath it, attached to a swinging arm, the unpadded metal bucket chair in which Geoff’s father sat for twenty operations over enemy territory. Pulling the chair out, Geoff sat down and placed the helmet on the desk. He looked around, soaking up the atmosphere. Among the instruments and equipment remaining in the cramped compartment, hanging from the bulkhead to his left was a rather familiar-looking bell-shaped Bakelite plug. Could it be?

Geoff picked up the end of the intercom cable on the helmet. He pushed the two bell-shaped plugs together.

For the first time in nearly 70 years, the flying helmet was reunited with Old Fred.

Geoff stood up, stooping somewhat under the low roof of the fuselage. He exited the aeroplane the same way he came in, leaving his father’s flying helmet on the desk.

Thanks to Geoff Easton for the photos and for allowing me to read the entry from his diary that inspired this post. © 2013 Adam Purcell

[1] While most sources list 49 trips, Geoff Easton believes he has found a 50th, to Berlin on 28JAN44. The 467 Squadron ORBs certainly appear to support this.